The most important part about owning and carrying a gun is how to use and carry it safely. 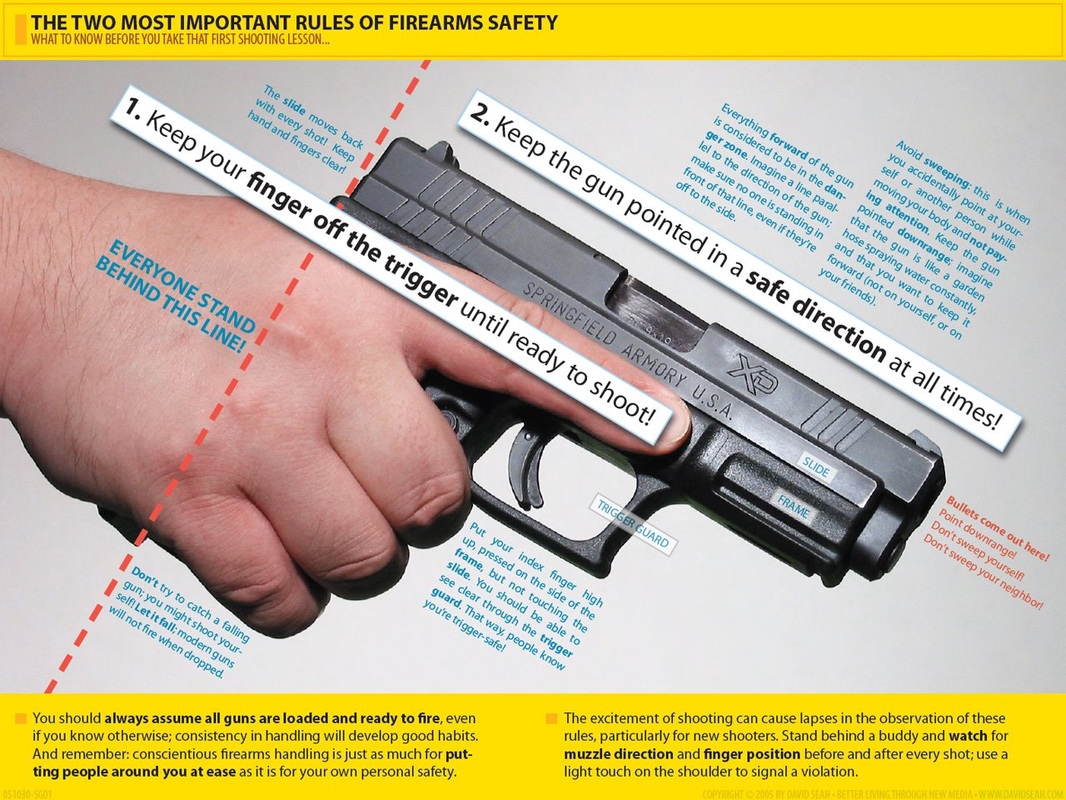 NRS 202.300 makes it a crime to allow a child access to a firearm unless it is “stored in a securely locked container or at a location which a reasonable person would have believed to be secure.” This allows a wide variety of method to be used, while still requiring responsibility and safety without becoming a draconian restriction like California’s laws.
Assume all guns are loaded all the time.
Never assume a gun is empty. Check to ensure that the gun is unloaded and the chamber empty. If you act like the gun is always loaded, you will treat it with more respect and are less likely to have a negligent discharge. How to check if a handgun is loaded or unloaded:

Semi-Automatic Pistols (video)
1. Apply the safety if there is one.
2. Remove the magazine and set it aside.
3. Lock the slide back and eject the cartridge from the chamber.
4. Visually look into the chamber and check with your finger (touch) to ensure the chamber is empty.

Rifles and shotguns will vary; refer to the manual or research online.

Whenever picking up, accepting, or handing over a firearm, check to verify that the weapon is loaded. Firearms should only be handed over with the action open and safety on, if available, excluding certain circumstances like self-defense or by experienced shooters while hunting or on the range. If you must hand over a loaded weapon, clearly inform the recipient that the weapon is loaded and advise them if the safety is on or if the weapon lacks a safety.
Keep your finger off the trigger until your sights are on target and you are ready to shoot.
Never trust your safety. Touching a trigger accidentally may cause the gun to shoot at the wrong time. Many deaths and injuries have been caused by unintentionally pulling the trigger.

“The gun just went off.”
Guns do not go off by themselves. There is no such thing as an accidental discharge; only a negligent or unintended one. The trigger must be pulled, unless it is of an incredibly poor or faulty design (video). Plenty of people have been killed by assuming a gun was empty and claiming that it “just went off.”

Unless you are carrying the weapon in a holster, using it for self-defense, or actually hunting, it is best to keep guns unloaded until ready to shoot.

If your gun does not fire when you pull the trigger, keep it pointed towards the target for 30 seconds or more before ejecting the cartridge. There may have been a 'hang fire' where the gun will fire long after the trigger was pulled. Stoppages and Malfunctions
Never point the gun at anything you are not willing to shoot.
Never point a gun (loaded or unloaded) at another person. Don't point a gun at anything that you don't want to destroy, like your car, a wall, or a TV set. If you do have a negligent discharge, if the gun is pointed in a safe direction.

Know your target and what lies beyond.
Make sure the area of your target is free of people, property, or animals. Don't shoot at random objects until you have inspected them. On a target range, make sure you have a safe backstop like a hill or berm behind the targets. In self-defense, you wouldn't necessarily want to shoot at a criminal if he is surrounded by children. When hunting, ensure that if you miss, you will not hit a person or something else. Do not shoot on or over a road and shoot away from buildings.

Lock your guns away when not in use, especially if children are in the home.
Guns should either be in a safe place or on the person. Use a gun safe, gun cabinet, locking container, or gun lock that prevents it from firing. Children should never be able to access a firearm, even if they have been trained in gun safety and they are well-disciplined. Unsecured firearms are the leading cause of accidental firearm deaths to children. The NRA recommends: STOP! Don’t Touch. Run Away. Tell A Grown-up.

Use only the correct ammunition for your gun.
Know the caliber and what loads are appropriate for your gun. For example, 9x19mm Parabellum (Luger) is different than 9x17mm, which goes by a variety of names like .380 ACP or 9mm Kurz. Some 9mm Parabellum guns cannot safely shoot high-power loads like +P+.
Wear ear and eye protection when shooting.

Never use alcohol or drugs before or while shooting.

Clean and maintain your guns.
Make sure the gun is in good working order and that the barrel is clear of obstructions. If you are shooting and a bullet does not come out when you fire the gun, but the empty case ejects, make sure the bullet is not lodged in the barrel. See a gunsmith. Do not attempt to fire another bullet to push the first one out. Your gun may explode.
Know shooting range protocol, safety, and etiquette (video).
Open Carry Safety
Never draw your gun to show it to someone. Turn your body so they can see it in the holster. Use a retention holster, either one that holds the pistol in place by friction or with a snap or hood that must be undone before drawing the pistol. Remain aware of your surroundings, pay attention to people behind you, and keep your guard up. Practice the Cooper Color Code 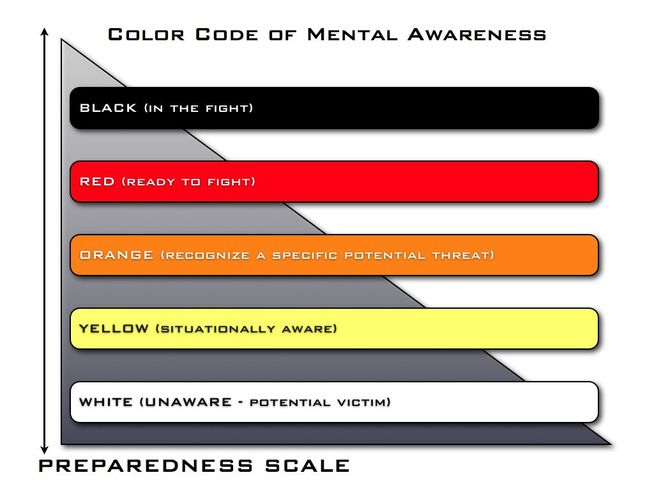 Find an NRA instructor here. Additionally, many quality Nevada firearms instructors can be found by searching online and at many shooting ranges have affiliated instructors. Nevada Carry is happy to offer recommendations. The Front Sight Firearms Training Institute in Pahrump offers extensive firearms training. This is a world-class facility and Nevada's premiere firearms training institute and provides excellent intermediate and advanced training.

Before you talk (or write about guns), know what you are talking about.

Allowing children unrestricted access to firearms is not something that Nevada Carry supports. While some children are capable of safely using a firearm unsupervised, there is far too many bad parents who do not properly train, supervise, or educate their children when it comes to guns. Nevada Carry supports changes to laws that only do the following:
A overly restrictive law mandating safe storage in a specified manner is an infringement on the right to keep arms and there likely are 14 year olds who are more responsible with guns than people three times their age, but unfortunately more parents fail to properly teach their children gun safety than those who have children they can really trust. Legislation cannot solve all problems, but perhaps the threat of a felony conviction will encourage people to lock up their guns and properly train their children to never, ever show off or play with a gun.

Just because your kid is safe around guns doesn't mean that someone else's kid is. Brooklyn Molher was accidentally shot by a teenage friend who was showing off her father's handgun. The father left the handgun for the teenager to protect herself while she was home alone. Neither the teenager or her father were prosecuted. Lock up your guns when you aren't home.