​This page is meant to address frequently asked questions that should have been answered by reading the website. We get a lot of questions that could have been answered had the person simply read the website. So if you get a 'yes' or 'no' reply without details or an otherwise short or snarky response, then you probably should have read the website thoroughly before asking. Do not email us if a little bit of reading and thinking can answer your question; the contact form is not an excuse from using your reading comprehension skills. The questions here are not comprehensive, just the ones we get emailed about the most. Please carefully review each page to see if you question is answered already before emailing. To quote the proverb, we're teaching you how to fish.

​Is this FAQ meant to be humorous and sarcastic?
Yes.​ Apparently people have a lot of trouble reading the website and getting simple questions answered.

Anything about felons…
We are not attorneys and cannot answer your question. Sorry.

The government is persecuting me! County Commissioner [Whoever] IS OUT TO GET ME. I Have Evidence! Can you blog about my story?
No. Stop taking whatever drugs you’re taking. Start taking any medication you have been prescribed or go get a prescription. Also stop listening to the voices in your head and what the hell are you doing with a firearm? Put tinfoil on the windows, coat hangers in the ceiling, and flush the toilet to slow down anything coming after you through the sewer pipes. Seriously, if they really are out to railroad you, have your attorney contact us.

What are the chances [any pro-gun law] will be passed?
Ain't gonna happen with a Democrat majority in either house of the state legislature. Moderate Republicans killed off virtually all pro-gun bills, including constitutional carry and campus carry, in 2015. As usual, weak Republicans squandered the opportunity of a lifetime. Unless we get true conservative Republicans in both the governor's office and in control of the legislature. If you vote Democrat, you're the reason none of this will pass and Nevada's gun laws are and will get worse.

I’m from out of state; can I open carry in Nevada?
Yes. Anyone who can legally possess a firearm can open carry, including non-citizens and non-resident aliens (tourists). Illegal immigrants are prohibited persons and may not possess a firearm.

Do I need a CCW to open carry in Nevada?
Seriously, did you even read the open carry page?

I’m under 21. Can I open carry?
Yes. No, you will not be harassed by the police simply because you look young.

Where in the law does it say open carry is legal?
It doesn’t. Nevada has no laws prohibiting open carry and without a law criminalizing something, it is legal to do that thing (NRS 193.120). Most states have recognized that open carry is constitutionally protected and courts have generally ruled the same way (whether they are right about concealed carry or not).

Can I open carry at a bank?
Yes. No, it is not federal property and/or no, federal gun regulations don’t exist for banks.

Can I carry with the chamber loaded?
Yes and please do. If you aren’t comfortable carrying a modern firearm with a loaded chamber, you probably aren’t confident enough to carry.

My friend told me that it's illegal to carry hollow-points/full metal jacket (FMJ) bullets.
Your friend is a dumbass. There is no such restriction in Nevada. Hollow-point bullets have a cavity in the nose designed to expand on contact with tissue. This provides increased stopping power and decreased penetration. Full metal jacket bullets penetrate better and sometimes over penetrate human flesh. No, hollow-points aren't designed to explode inside of people (dum-dum bullets).

​I’m visiting [insert name], Nevada. Can I open carry there?
Yes, except for the specific places (schools, universities/colleges, child care facilities, and federally regulated locations) where guns are prohibited. Anyone, from any place (county, state, planet) can openly carry as long as they are legally in the US and able to possess a firearm. This includes Canadians (you know who you are).

Can I open carry or carry concealed at the post office window at my local 7/11?
Yes. Contract stations do not fall under the definition of “real property under the charge and control of the Postal Service” as they are specifically owned or leased by the supplier and not federally owned or lease property. See 39 CFR 232.1.

Can I carry a gun at a private school?
No, except with permission of the principal, NRS 202.265.

What's a public building?
A government owned building; not private property open to the public.
Doesn’t state preemption apply to my HOA/private/property or businesses?
No. State preemption of firearm regulation only applies to the government; specifically the legislature is the only authority that can regulate firearms (except for unsafe discharge) and counties, cities, and towns are specifically mentioned as having no authority. Private property and owners associations do not fall under those statutes as 1, they are not mentioned by the laws, and 2, such regulations could never be criminally enforceable. This includes HOA owned parks, even if they are mentioned as part of the local park system, if the HOA owns the ground.

Does Nevada recognize my state’s permit or my non-resident permit from another state?
Look at the map. 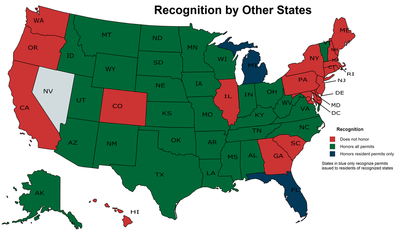 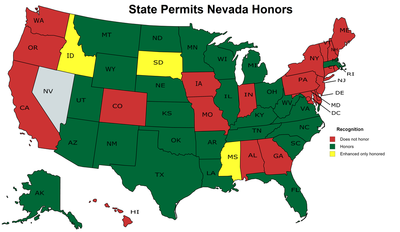 I just moved to Nevada and I have a CCW from another state. Do I have to go through the Nevada training?
If you have recently become a resident of Nevada and hold a non-resident or out-of-state permit, there is a 60 day grace period if the sheriff of your county has not issued you a Nevada permit. For example, if you hold a concealed firearm permit from Arizona, but you live in Laughlin, it would be illegal to carry a concealed firearm in Nevada using an out-of-state permit. If you are moving to Nevada and have an out-of-state permit, you must apply for a resident permit from scratch, including taking the training class. Out-of-state permits or military training/discharge does not count as approved training. No, CCWs are not like going to DMV and getting a new license.

I don’t give very good fingerprints because they’re worn down and I always have problems. Can I still get a CCW?
Yes, the various agencies have other methods to obtain the same information that a fingerprint search reveals. It simply takes longer and requires more work (manual records checks).

Does my CCW cover knives?
No. Nevada issues Concealed Firearm Permits (CFP), not Concealed Weapon Permits. You may only carry handguns concealed with a CFP, defined as “firearms having a barrel less than 12 inches in length,” (NRS 202.253).

My gun is in someone else’s name; can I carry it?
Yes, although with the demise of handgun registration in Clark County, unless you are from one of the registry states, I don’t see how a gun can be ‘in’ someone else’s name. This would change to prohibit owners of firearms lending guns if Ballot Question 1 passes in November. Ballot Question 1 would make it a crime to lend a gun, even temporarily, to non-relatives except under very limited situations. Vote ‘no’ on 1.

Do I have to register my gun or get a pistol permit?
No. There is no gun registration in Nevada, voluntary or otherwise.

Is there a way to register a gun so if the police stop me they can tell it’s mine?
No and you are a fool if you think gun registration is for that purpose. Police aren’t going to be “more comfortable” dealing with you because your gun is ‘registered.’ Registration is not about peace of mind for the officer. Police must have probable cause to believe your gun is stolen before seizing it. Temporarily taking custody of it during a brief detention (traffic stop) is permissible and the officer may or may not run the serial number to confirm it is stolen, which has not yet be constitutionally tested.

If my gun is unloaded, can I carry in a bag or case, technically concealed?
Technically, no. Anytime the weapon is physically on your body or being carried in a container by you, you are carrying concealed and a permit is required. Set the bag down or put it in your car, pick the bag up an inch and now it’s carried. See this opinion from the Attorney General. In practical terms, carrying a firearm in a bag or case for a legitimate purpose, such as from the car to the range, or from the car home, falls under an officer’s discretion and would not be enforced. Lying about going to the range while carrying a gun in one’s backpack for protection, good person or bad, might be prosecuted. Even so, we are unaware of any such ‘backpack’ cases.

Can I carry my gun concealed in my home, car, or on my private property without a permit?
Technically no. State law makes no such provisions for that, though enforcement would be almost impossible and officer discretion would likely be a major factor. Car carry needs to be off-body or openly carried; in Nevada, a car is not an extension of the home.

If I have my gun out of sight in my car, but not on my body, is that concealed for purposes of needing a permit?
No, it is legal to have a gun out of sight in a car (i.e. concealed). To be illegally concealed without a permit, the gun must be holstered on your body, in a pocket, or in a bag or container held or carried by you. So if you set a purse with a gun in it on the seat, the gun is no longer on your person and would be legal. However, if you carried the purse when you got out of the car, you would need a permit to be legal. See this opinion from the Attorney General.

If I get pulled over, should I tell the officer I’m carrying a gun?
Legally, you only have to inform an officer that you are armed if you are carrying concealed and are a permittee. Otherwise, you may or may not inform the officer, with varying results.

Why are people like you against background checks?
Because background checks are not the issue. Requiring all sales to proceed through a dealer is the intent of the law. ‘Background checks’ or requiring dealers for all sales/transfers is unenforceable without mandatory gun registration. Once all sales are required to go through a dealer, the next step will be to require dealers to report all sales to the state or federal government as happened in California.
​
Can you recommend an instructor/gun store/etc?
We used to, but readership has grown so much that it's impossible to make good recommendations statewide.