Many government (public) buildings are posted with 'no gun' signs. The styles vary, but the intent is clear. They do not want firearms, legally carried or not, in the building. In rural counties, the opposite might be true. Complicating the issue is the fact that the law has changed several times recently. Only in the urban counties of Clark, Washoe, and Carson City are signs on government buildings prevalent and firearms inside a major issue. Local authorities are prohibited by law from making their own firearm regulations or rules in public buildings.
"Public" means a government building (owned by cities, the state, counties, local districts, etc.). This does not mean private property open to the public, like casinos, stores, and other businesses.

Where is it illegal to carry?

﻿Federally prohibited locations
Firearms, loaded or unloaded, concealed or openly carried, are prohibited in the following places Firearms are banned in "a building or part thereof owned or leased by the Federal Government, where Federal employees are regularly present for the purpose of performing their official duties" and includes essentially all parts of federal court facilities (18 USC § 930). 'No weapons' signs must be posted at federal facilities in order for someone to be convicted (but you may be arrested).
State prohibited locations
Any type of carry (open or concealed) is illegal in the following places: NRS 202.3673 concealed carry (open carry legal) prohibited areas:
Local and State Public Buildings
NRS 202.3673 prohibits concealed carry (not open carry) in public buildings where there are 'no firearm' signs or metal detectors at each public entrance. An opinion from the legislative council bureau found that open carry in public buildings is permissible. Signage at public buildings generally does not refer to open carry as the intent is to improperly discourage anyone from carrying at all, openly or not. State law also makes no reference to open carry at all.

Does this affect public libraries?
Yes, however in Flores v. LVCCLD, the Nevada Supreme Court erroneously found that preemption does not apply to library districts. The Las-Vegas Clark County Library District is currently enforcing an open carry ban and will prosecute. Please read the blog and check your local library rules for more details. ​ ​

Two Important Exceptions
Per NRS 202.3673(4)(c) Permittees who are employees of a public building may carry a concealed firearm in that posted building, however, NRS 244.364 (counties), NRS 268.418 (cities), and NRS 269.222 (towns), the state preemption laws, allow local authorities to make their own policies regarding firearms. So while a permittee may carry legally inside the building, they can be disciplined or fired if they carry in violation of their employer's ban on carrying firearms. Permission is rarely granted. For example, the Nevada Dept. of Administration has a curious policy, which basically could be considered no-yes-no, as far as employees possessing firearms.

*To see what is and isn't a licensed child care facility, visit this DPBH webpage and look for the current list under the 'Resources' right-hand sidebar and click 'Providers.' 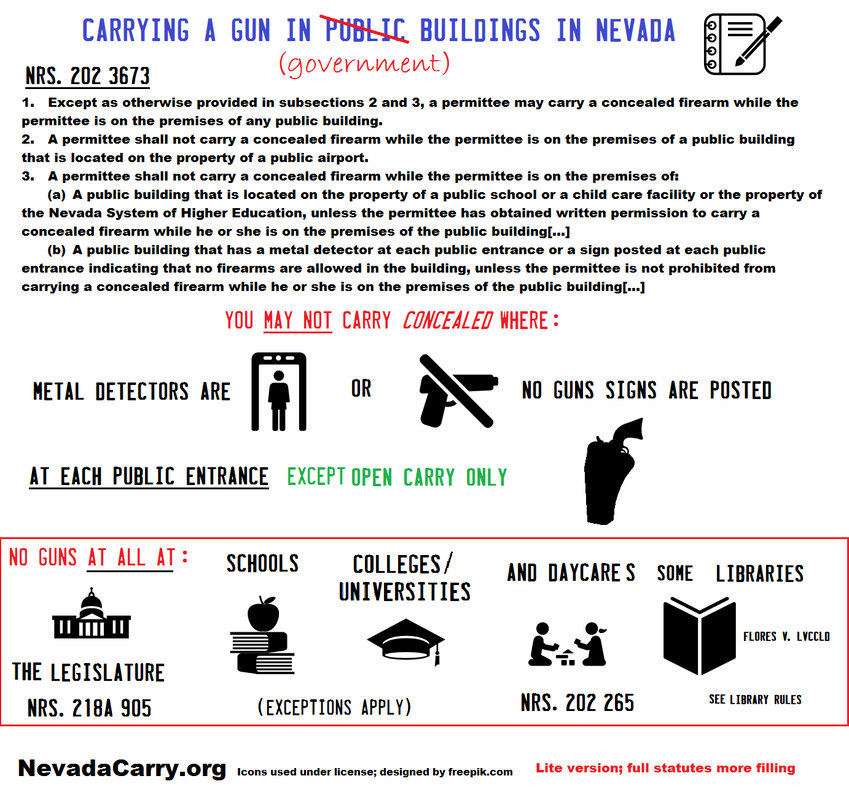 'Signs or Metal Detectors at Each Public Entrance'

Open carry is actually less restricted than concealed carry. Open carry is legal in most public buildings, but you might be harassed by police/security/officials who insist they know better.

Read NRS 202.3673 carefully: “Except as otherwise provided […], a permittee may carry a concealed firearm while the permittee is on the premises of any public building.” The exceptions are above. See how it doesn’t mention open carry? This is where it’s important to understand the legal definition of ‘concealed firearm’: “[…] a loaded or unloaded handgun which is carried upon a person in such a manner as not to be discernible by ordinary observation.” As we discussed in the post about open carry basics, if you can see it and tell that it’s a gun, it’s carried openly. Open carriers can ignore the signs for the most part (cautions below).

The 1995 amendment banned concealed firearms in virtually every type of public building (SB 299). In 1997, the law made a minor change: "must" to "shall" (AB 141). Then, in 1999, the law changed to only locations with signs and metal detectors at each public entrance, plus airports, schools, and colleges (AB 166). This change stood until 2007. In 2007, the current iteration of the law was enacted pursuant to SB 354, which also affected NRS 202.265 which bans firearms at schools. a provision was added to cover childcare centers after an unprofessional bounty hunter raided a daycare and scared the children.
​
Metal detectors will be obvious and it will probably take a court order to allow you to open carry beyond as the law allows. Nevada Carry instead urges you to contact your legislator to allow unrestricted concealed carry in government buildings once more, rather than force and all-out ban on firearms in public buildings. 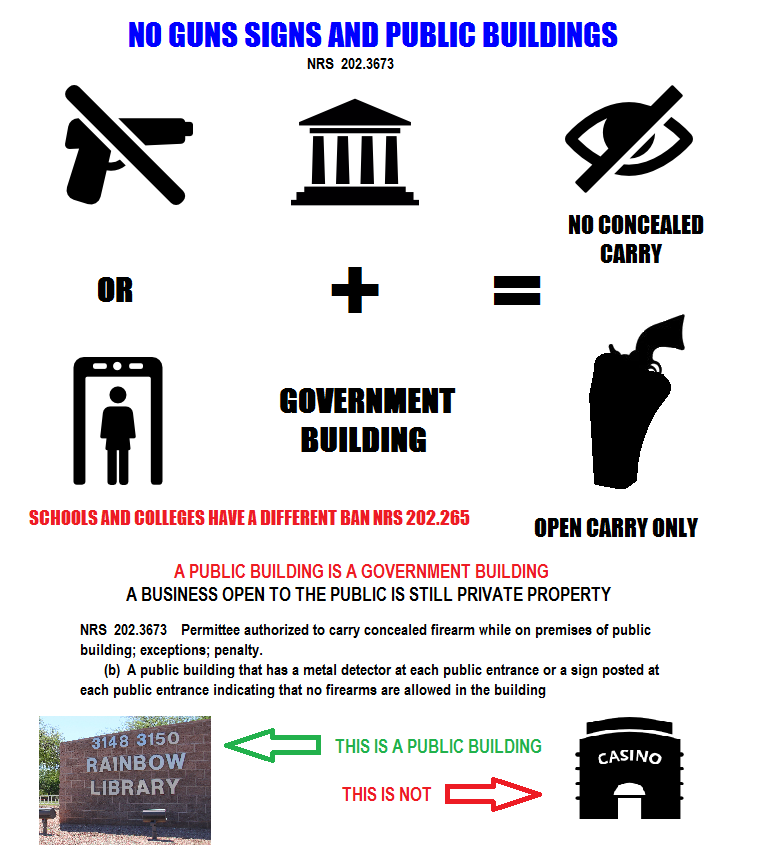 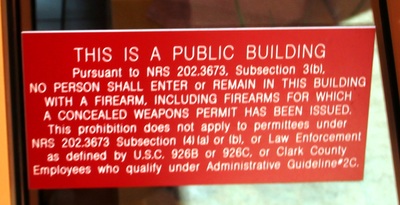 This sign invokes NRS 202.3673 but typically leaves out the important part about concealed firearms. Probably outdated from previous wordings of the section. See above. 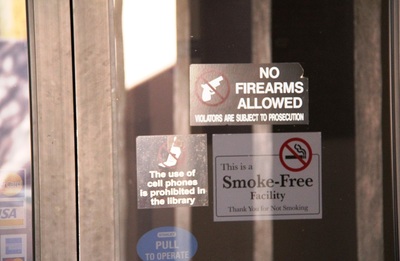 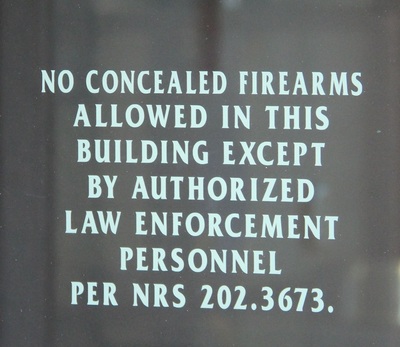 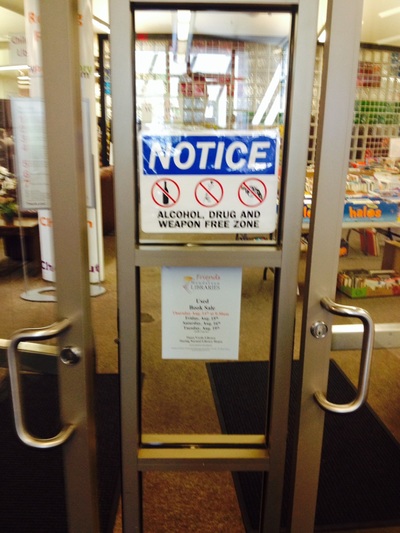 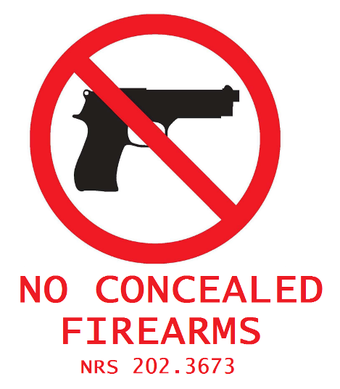 Caution
​Many government agencies are reluctant or downright hostile to open carry in their buildings. Legally, open carry cannot be prevented in a courthouse, the public areas of a law enforcement building, city or county buildings, libraries, etc. unless it falls into the categories mentioned above as off-limits. Yes, you can open carry at the DMV. The DMV staff have all been informed to good effect that open carry is perfectly legal in state buildings.
Uninformed officials or security guards may very well harass you (mostly in Clark, Washoe, and Carson City Counties). Several people legally open carrying while undergoing lawful business at government buildings or police stations have been improperly detained or had guns pointed at them, simply because of a gun on their hip. The sad reality is that some police agencies and government officials do not want to yield the right to bear arms to the public, especially in ‘their’ domain. A citizen should not be denied the right to bear arms because they are in a public building, anymore than they would outside.

Discretion is the word when carrying in a public building. It is perfectly legitimate to do something legal, such as carry where not prohibited, without having to disarm. The reality is that until enhanced preemption is enforced by stronger civil penalties in October, harassment will be common in some venues. One cannot expect to go uneventfully about their business in a known hostile location until this attitude is corrected.

Additionally, confrontations must be handled smartly and politely. Citizens carriers, particularly open carriers, must be good ambassadors for an armed citizenry and show that nothing bad happens when normal people can enjoy their right to keep and bear arms. If the pressure is applied the wrong way and the political landscape changes in the future, we may face a battle to prevent legislation which would ban all forms of carry in all public buildings as existed in the past.