“Concealed firearm” is a loaded or unloaded handgun which is carried upon a person in such a manner as not to be discernible by ordinary observation (NRS 202.3653), this includes in a carried bag/purse.
Concealing a firearm without a permit is a felony. Nevada is not a constitutional carry state.
"Printing," where the imprint of your gun shows through your clothing, is not illegal anywhere in the United States.

No guns signs
Signs do not have the force of law on private property. In public buildings, only concealed carry is banned where 'no guns' signs are posted or metal detectors are present at each public entrance (NRS 202.3673), except federal government buildings where all carry is banned.​

Bar carry
It is legal to carry concealed or openly in a bar or restaurant, even while consuming alcohol. One cannot possess a firearm if their blood alcohol content is more than .08 BAC (NRS 202.257). Changed in 2019 from .10.

Where is concealed carry illegal?

Firearms, loaded or unloaded, concealed or openly carried, are prohibited in the following places: Firearms are banned in "a building or part thereof owned or leased by the Federal Government, where Federal employees are regularly present for the purpose of performing their official duties" and includes essentially all parts of federal court facilities (18 USC § 930). 'No weapons' signs must be posted at federal facilities in order for someone to be convicted (but you may be arrested).

National Parks
Section 512, Credit CARD Act of 2009 (and 54 USC § 104906) changed federal law to make park firearm regulations reflect state law. Typically, the only restrictions on firearm carry are state and local laws. If it is legal elsewhere in the state, it is legal in the park and sections that conflict with state law regarding carrying and possessing firearms (but not shooting bans) do not apply. So though on National Park Service lands (National Parks, Monuments, etc.) carrying a firearm or possessing loaded firearms are prohibited in vehicles (unless one has a special park permit, usually for hunting), this does not apply if the state allows open and/or concealed carry, or loaded/unloaded firearms in vehicles.

The park buildings (visitor centers, offices, etc.) are still federal facilities and off-limits to firearms. Discharge of firearms, except when lawfully hunting, is generally prohibited. Discharge of firearms, except when lawfully hunting, is generally prohibited. NPS pamphlet here. The same applies for National Wildlife Refuges, 16 USC § 1a–7b.
Red Rock National Conservation Area is an exception and does not allow loaded firearms (no magazine/clip inserted, no rounds attached to the weapon or in the chamber). It is not a part of the National Park System and is managed by the Bureau of Land Management. See the supplemental rules section regarding weapons only here. More at the blog and sign the petition here. Shooting on Bureau of Land Management land is permitted in most other areas, subject to local restrictions and county/city ordinances (BLM Recreational Shooting page). National Forest lands in Nevada have no ban on the carry of firearms.
​
​Hoover Dam prohibits firearms. More information at the Hoover Dam Police page. 43 CFR 423.30

. All firearms are prohibited in the following places: NRS 202.3673 ​(concealed carry only) prohibited areas:Signs do not have the force of law on private property or for open carry. "No guns" signs only have force of law for permitted concealed carriers at public (government) buildings.
​Non-residents and non-resident permits (reciprocity)
Recognized states are set by the Nevada Sheriffs’ and Chiefs’ Association pursuant to state law. If you hold a recognized permit on the reciprocity list, and you do not reside in Nevada, you may legally carry a concealed firearm in Nevada. Nevada residents must hold a Nevada-issued concealed firearm permit to carry a concealed firearm. Non-resident or out-of-state permits are not recognized for Nevada residents. There is no specific exemption for military members or their spouses. Certain permits for persons 18-20 are recognized by Nevada as long as the permit meets our basic requirements; we do not discriminate based on age. ​
I just moved to Nevada and I have a CCW from another state. Do I have to go through the Nevada training?
If you have recently become a resident of Nevada and hold a non-resident or out-of-state permit, there is a 60 day grace period if the sheriff of your county has not issued you a Nevada permit. For example, if you hold a concealed firearm permit from Arizona, but you live in Laughlin, it would be illegal to carry a concealed firearm in Nevada using an out-of-state permit. If you are moving to Nevada and have an out-of-state permit, you must apply for a resident permit from scratch, including taking the training class.

Our state, our rules.
Holders of a non-resident concealed firearm permit must abide by the same restrictions in carrying a concealed firearm as they would as if they held Nevada concealed firearm permit (NRS 202.3688). On the plus side, Nevada's concealed carry laws are among the most relaxed among the states that require a permit. You can carry in bars and drink alcohol (don't get intoxicated), in cars, and signage doesn't have the force of law. ​
Non-Residents Can Get Their NV CCW Faster with This One Weird Trick!
I have a non-resident permit from another state, but I live in Nevada. Can I carry concealed?
No. You must have a Nevada permit to carry a concealed firearm if you reside in the state, but new residents have a 60 day grace period until they must have a Nevada permit to carry concealed legally in Nevada. CA, DC, HI, IL, MA, MD, NJ, NY (no/may-issue states) residents: You do not have to have a permit issued by your home state; this includes all non-resident permits recognized by Nevada (see maps for recognized states). NRS 202.3688

​​Can I carry concealed on private property or in my home?
No. Concealed carry without a permit is illegal everywhere in the state. While it is unlikely you will be arrested for carrying a concealed firearm without a permit on your own private property, it is not legal. Enforcement would be almost impossible. See NRS 202.350 1.(d)
Background Check Exemption
Most Nevada permittees qualify for an exemption from the requirement to undergo the background check (as they've already been vetted) when buying a firearm from a dealer and paying the $25 fee. The Form 4473 is still completed and a copy of the permit is needed for the dealer's records.

Can I carry my AR/AK pistol concealed in Nevada?
Yes. It is legal to carry a concealed large unconventional pistols, like AR/AK pistols, if you have a concealed firearms permit. NRS 202.3653 defines “Concealed firearm” as "a loaded or unloaded handgun which is carried upon a person in such a manner as not to be discernible by ordinary observation." The definition of a “Handgun” is referred to 18 U.S.C. § 921(a)(29), which states: “The term ‘handgun’ means — (A) a firearm which has a short stock and is designed to be held and fired by the use of a single hand”.” The erroneous belief likely stems from the days of “blue cards” when police would refuse to register such weapons or when revolver/semi-auto qualifications were required for a CCW. Now technically, you can't carry a long-gun concealed, even in case, but this is a non-issue and nothing to worry about. More details at the blog.
​Concealed carry is better than open carry because surprise will work to my advantage.
The idea behind this is that an openly carried weapon may make the carrier a primary target of the criminal/terrorist. The concealed carrier would blend in with the crowd, and then draw at when it was to their advantage.

This assumption is generally false in the absence of evidence that an openly carried weapon leads to victimization. Abundant evidence is available that open carry is indeed a deterrent to crime. Concealed carry lacks that deterrent factor. The 'gray man' element, appearing unremarkable and blending in with the crowd, only has application when one may be specifically sought out; such as in the case of a police officer. The desire not to be spotted carrying a firearm or otherwise identified typically comes from the police influence in the concealed carry training world.

The advantage of concealed carry lies in the fact that it may be possible to carry in places where open carriers would be shunned or asked to leave, such as casinos. Legally speaking, the advantage is with open carry, yet due to modern sensitivities, the discreet option of undetected concealed carry would prevent any debates with anti-gunners or objections to having the weapon on private property where the owner/management might prohibit it. Also, given one’s choice of dress or activities, concealed carry may be more appropriate.

The debate is largely a matter of taste and environment. A citizen carrier with anti-gun customers or friends may want to protect themselves without alienating others. Some may feel uncomfortable carrying openly. Whatever the choice, it is a personal one and not to be judged or criticized.

Open carry and concealed carry each have their own unique advantages and disadvantages; neither is inherently superior to the other. Both methods complement each other and allow for flexibility in self-defense.
Open carry is not suicidal; attacks debunked
Quick Guide to Reciprocity-Permit Validity Across the States 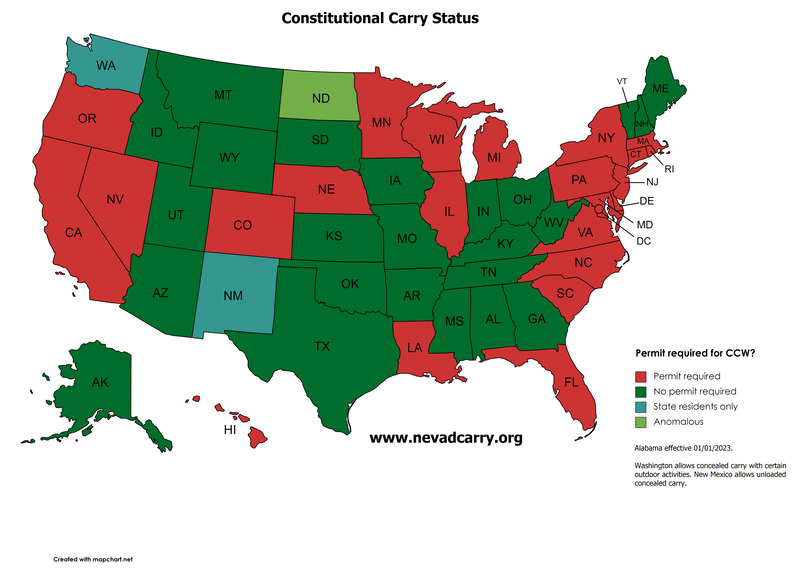 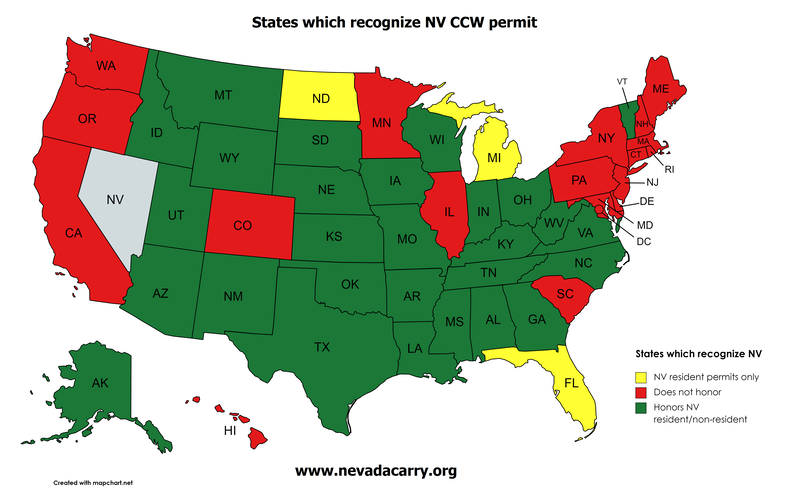 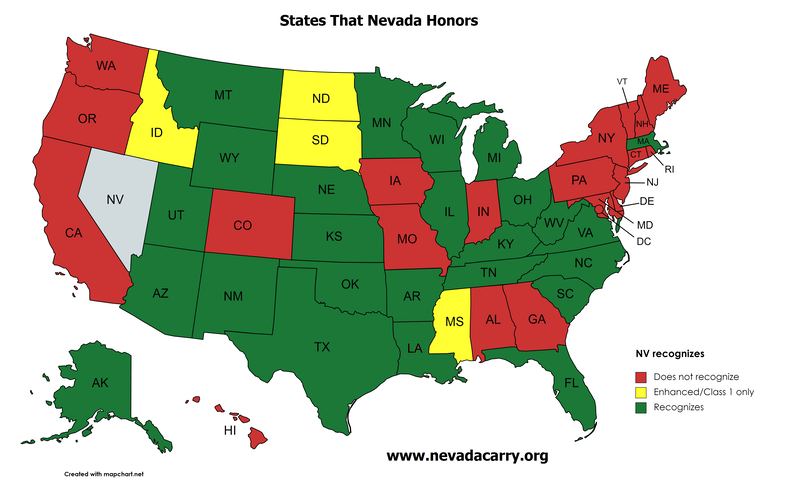 Note: in practice some states that de jure may not recognize Nevada's permit may continue to do so until their own reciprocal lists are updated. Likewise, the Nevada data is taken from the published DPS RCCW list, which is usually updated each July. These images err on the side of caution.
State reciprocity List