​In response to a lot of comments and questions about where to shoot in the Las Vegas/Southern Nevada area, we've worked up a list and map of the most popular desert shooting spots in our usual, thorough and comprehensive manner.

The Las Vegas Valley Shooting Closure map shows all the prohibited areas, including the urban parts of the Las Vegas Valley and surrounding areas. It is a general overview and rather low fidelity, but provides a good guide to the restrictions in place. See our interactive map further below.

For those who wish to shoot on an actual range with good facilities, but don't have a membership, the Clark County Shooting Complex is an excellent public facility with reasonable fees. It is run by Clark County Parks and is on the north side of the valley, at 11357 N Decatur Blvd, Las Vegas, NV 89131.

Those shooting on public lands must be safe and also pick up their brass and any trash or public lands will be closed. Current closures/restrictions. 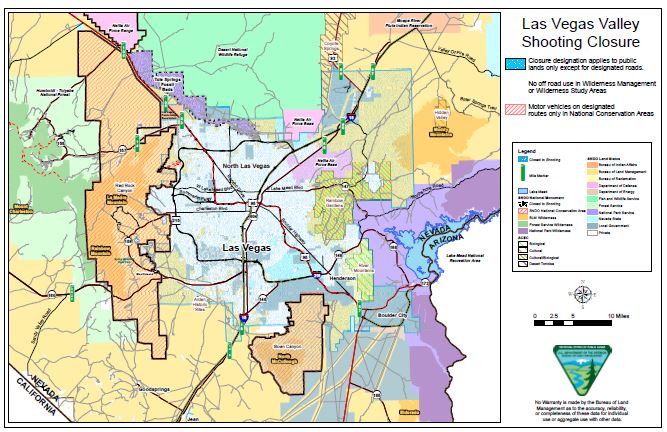 BE SAFE & CLEAN UP OR LOSE YOUR PUBLIC LAND SHOOTING AREAS.

Overview of Government and Law

Shooting inside the urban Las Vegas Valley and all incorporated cities is illegal, except on an approved range.
​
Bureau of Land Management
The Bureau of Land Management (BLM) controls the vast majority of open land in Nevada. While this land is administered by the federal government, state and local laws govern discharge of firearms (see Clark County code below). Tannerite and tracers are banned because they start fires. 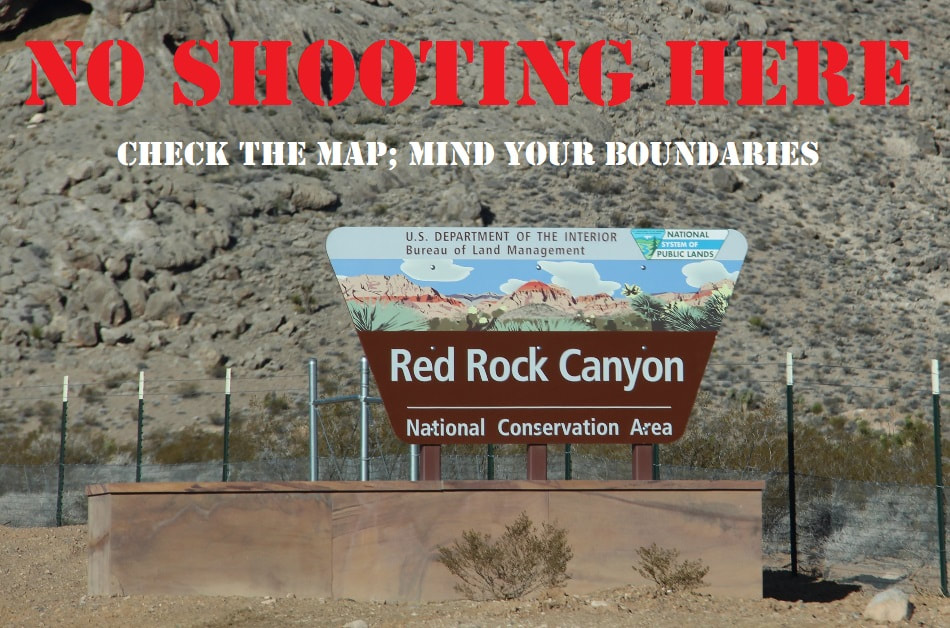 Forest Service
In addition to any temporary closures (such as fire restrictions) or county/state regulations, you cannot shoot in a manner to endanger property or persons.

36 CFR § 261.10 The following are prohibited:
[(a)-(c) omitted]
​(d) Discharging a firearm or any other implement capable of taking human life, causing injury, or damaging property as follows:
(1) In or within 150 yards of a residence, building, campsite, developed recreation site or occupied area, or
(2) Across or on a National Forest System road or a body of water adjacent thereto, or in any manner or place whereby any person or property is exposed to injury or damage as a result in such discharge.
(3) Into or within any cave.

The Forest Service is claiming that within the Spring Mountains area (Mt. Charleston), shooting is prohibited with 2 miles of a road. Rules here.

Other Federal Areas
The Desert National Wildlife Refuge (north of Las Vegas in the Sheep Mountains) prohibits target shooting (use of firearms, 50 CFR 27.42) as well as the Mojave National Preserve south of Searchlight, in the tip of Nevada (NPS lands).

Regarding roads and vehicles, generally, you may not:
​Clark County
Clark County Code (12.04.230) prohibits discharge of firearms (except for self-defense) off of established target ranges. 2019 update.

Discharge is prohibited within:  Violation is a misdemeanor, punishable from between $100-$500 and/or up to 6 months in jail.

See 2019 updates. Lovell Canyon is now off-limits per county code. On the 2019 map, the newly prohibited areas are in light yellow.

The no shooting areas in Clark County have grown. On Wednesday, October 2, 2019, the county commissioners voted for an expansion in three areas (agenda link).All in all, this is a minor expansion and for mostly legitimate reasons. It is a reminder to all shooters to be safe, pack out their trash, and encourage good behavior from others.

​Restrictions are in yellow on the below maps and the buffer zone off of Lovell Canyon is in orange. Map as of 2022.

​Sloan
The Sloan shooting area is on the east side of I-15, about 6 miles from St. Rose Parkway. Access is from Las Vegas Blvd. This area is a large, open area that leads deep into the Sloan Canyon area (part of which is a no-shooting National Conservation Area). Many spots can be found inside. Ranges average 100 yards, but longer shots are available further inside. Much of the area close to the road is within the ½ mile shooting prohibition buffer zone from I-15, though this does not appear to be enforced regularly. The Sloan spot itself has a fenced approach road (installed 2021) to get shooters out of the no-shoot zone. Follow this road until the fencing ends.

Many regular shooters have noted over the years that there are serious safety concerns with Sloan due to shooters' behavior. Part of the range is not backstopped and shots can go high and possibly hit traffic on the interstate. Additionally, because it is so easily accessible, novice shooters with little safety training often come to shoot. Combined with large numbers of shooters with varying levels of experience, accidents and conflicts can and do occur. This is why it is absolutely vital to use safe range habits when shooting here.

Pick up your brass and trash! The BLM does not clean up after you; volunteers do. Don't shoot trash like TV, computers, or any glass. If you bring it, you clean it up.

There are several areas before you reach Sloan that are not open for shooting, despite people doing it anyway.

​Directions: Take I-15 south to Exit 25. Turn left at the stop sign, go under the interstate, and turn right at the next stop sign (Las Vegas Blvd.). Proceed south on Las Vegas Blvd. Watch carefully for mile marker 15 on your left. Approximately ½ a mile from MM15, turn left where a dirt road leads to a large flat area. The roads inside the Sloan shooting area are rock and dirt; rough, but suitable for a passenger car.

Sloan can be quite dangerous. Be safe! Only through community engagement can experienced shooters help the inexperienced and stop dangerous shooters. A 4 year-old girl, Dayla Pizzoferrato, was killed in a freak accident when she was struck by a ricochet. Others were injured in an explosion. 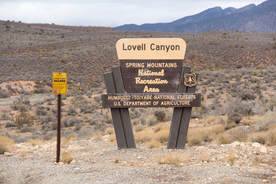 Lovell Canyon (closed to shooting)
Lovell Canyon is within National Forest land on the south side of the Spring Mountains, just outside the small community of Mountain Springs. It can be reached by heading west towards Pahrump on HWY 160 (Blue Diamond Rd.). The area is a multi-use recreational area for hiking, hunting, shooting, and camping. Many of the shooting spots are too close to the roadways to be safe or legal.

CLOSURE ORDER
The Forest Service temporary closure has been extended by county code to include all areas of Lovell Canyon Road within a 1/2 mile of the roadway. This is permanent. 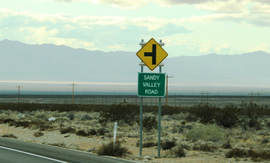 Sandy Valley Road
Desert shooting spots on flat terrain that backstops against the rising foothills at the base of Mt. Potosi.

Directions: Take Blue Diamond Rd. (HWY 160) west towards Pahrump. Stay on this road as it exits the urban valley and passes Red Rock Canyon. You will climb over the mountains and continue through Mountain Springs. Continue past Lovell Canyon Rd. for approximately 2 miles. Turn left. Shooting spots begin about ½ a mile in, on the left, facing east towards the mountains. Washboard dirt road.
​
Cold Creek Rd.
This is an open area in the far northwest off US 95 at the base of Mt. Charleston off a paved road leading into the national forest lands. Past the prisons, there are areas to shoot.

Directions: Take US 95 north. Watch for the signs of Cold Creek Rd. and the state prisons. Turn left on Cold Creek Rd. The most popular spot is approximately 5 and a half miles from US 95. The road is paved until the various turn-offs. Be aware of the small community of homes in the area. 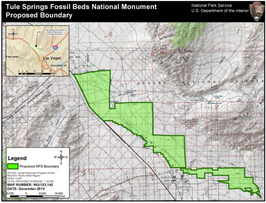 ​Corn Creek/Mile Marker 103 (shooting prohibited)
The area known as Corn Creek or mile marker 103 (US 95) in the northwest is no longer a legal place to shoot. Its canyon-like washes were popular with many shooters. In December of 2014, President Obama signed an act creating the new Tule Springs National Monument, which is located in the northwest corner of the valley, bordered by US 95, Indian Springs, and the Sheep Mountains.

Shooting in the new Tule Springs National Monument is illegal. While it is permissible to openly carry or have concealed firearm, target shooting is prohibited (36 CFR 2.4) on National Park Land. With the creation of the national monument, it left the control of the BLM, though they may patrol the area for the National Park Service.

You cannot shoot at Corn Creek/MM 103. In fact, shooting is prohibited up to approximately MM 105 (Lee Canyon Rd.). The area is not suited for shooting until you get up to Cold Creek as it is sandwiched between Red Rock land on one side of the highway and on the east side, the Nellis range isn't too far off the road. If found by rangers or Metro officers at Corn Creek, you will be asked to leave and may be issued a citation. Last year, there was an accidental death in the area.
2022 closure map
​Others
Apex/Pabco Rd. and the Nellis dunes are off-limits to shooters. On US 93, shooting is permitted after mile marker 56. South on US 95, be aware that Boulder City limits extend very far south through empty desert and shooting is prohibited within city limits. In the southern tip of the state (beyond Searchlight) is the Mojave National Preserve, which is national parkland, and shooting is prohibited.
Washoe County Congested Area Map 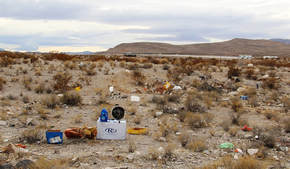 ​These are the most important gun safety rules to keep in mind when shooting in the desert, especially at a crowded spot.

Do not walk down range while people are shooting, or vise versa.

Know your target and what lies beyond.
Make sure the area of your target is free of people, property, or animals. Don't shoot at random objects until you have inspected them. On a target range, make sure you have a safe backstop like a hill or berm behind the targets—bullets from a .30 caliber rifle can travel up to a mile and a half. Do not shoot on or over a road and shoot away from buildings.

You need a good backstop for your target, such as a hill, berm, cliff, or side of a canyon. As in the illustrated photo below, there is no backstop for this target. Any missed shot aimed high could travel and strike traffic on the highway. 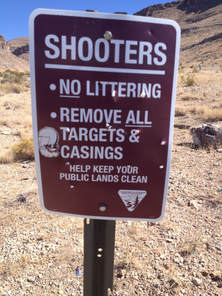 Never shoot straight up; what goes up must come down. People have been killed or seriously injured doing this.

Tracers, explosive rounds, explosive targets (Tannerite) and fireworks are all prohibited on BLM land. Additionally, using these items can start a brushfire.

Pick up your trash! Trigger trash is responsible for the closures of many popular sites around the valley. The BLM will not hesitate to close shooting spots temporarily or permanently if too much garbage accumulates. Beyond spent shells, stray brass, ammo boxes, targets, and target stands, many popular shooting sites are used as dumping grounds.

Don’t shoot glass. People can be hit by fragments or injured if they step or fall on the shards. It’s also very hard to clean up.

BE SAFE & CLEAN UP OR LOSE YOUR PUBLIC LAND SHOOTING AREAS.